OTTO III
Otto III was born in 980; he was the son of the Saxon emperor Otto II and the Byzantine princess Teopliano (or Teofano), daughter of the East emperor Romano II. Being orphan of his father when only three, the child-emperor grew educated by his mother, from which assumed the love for the culture, and by the most scholar teachers of that time. He get the effective head of the empire in 995 when it was only fifteen.
Otto deeply felt that the over-nationality of his role coincided with the revaluation of the "romanity" of the emperor; he therefore considered the revaluation of the role and the image of Rome among the most qualifying features of his kingdom. 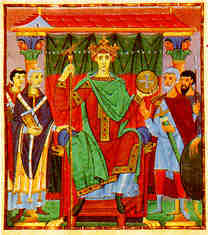 He forced the roman clergy to nominate Brunone of Carinzia, his cousin, Pope with the name of Gregorio V (996-999). The next year he went to Rome to receive from the new Pontiff the imperial coronation, in the same way as Carlo Magno did almost two centuries before.
In order to obtain the union of the different European nations through the faith, Otto carried out a series of pilgrimages: in Germany he was informed about the martyrdom of Adalberto (997), to which was bound by personal friendship and sincere veneration, by the Prussian that he was trying to convert.
In memory of him he erected a church on the southern end of the Tiber Island, where in the antiquity was a temple devoted to Asklepios, god of medicine (it is related that Otto chose the Tiber Island in order to see the church from its Aventino building).
In 1000 he went in solemn pilgrimage to Gniezno, in Poland, to pray on the grave of the friend martyr, and got some relics to be brought in the church on the Tiber Island. The church was endowed with many other relics, among which the skin of St. Bartholomew, whose name in short time replaced the St. Adalberto one.
In February of 1001 the incomprehension of Roman people developed into a revolt: besieged in the Palatine buildings, Otto left Rome taking refuge in the castle of Paterno, at foots of Soratte mount, waiting for reinforcements from Germany. But on January 23rd of 1002, also worn out by malarial fevers contracted in the Ravenna marshes, he died when was only 22 years old.
His faithful soldiers moved the body of their unlucky emperor to Acquisgrana where, according to his desire, he was buried close to the great Carlo Magno; by now it has been lost the memory of his grave.
Ref. link: "Bulletin of cultural information of the Pro Loco of Sant'Oreste (RM-Italy) " [Italian language only]

ST. ADALBERT
Born around 956 at Libice from a family of the Bohemian aristocracy, Vojtech (this his native name) was soon initiated into the ecclesiastical career. It studied at the Episcopal school of Magdeburgo in Saxony, under care of Adalbert, the bishop that gave him the confirmation and from whom he got the name. He was ordained priest in Prague from Thietmar, first bishop of the city. Adalberto was member of the clergy of the Prague cathedral and assumed the guide of the diocese in 983.

During his travelling across Europe he became in touch with important monastic milieus: after a stay at Montecassino he approached St. Ni1o, founder of the Byzantine rite monastery of Grottaferrata. In Rome he found hospitality at the monastery of the Sts. Bonifacio and Alessio on the Aventino.
During the second Roman stay (994-996?), he had the opportunity to become in friendship with Otto III, that since then felt great veneration for him.
Adalbert decided to devote himself to the conversion of the pagan populations of Poland. He went therefore to Prussia, but his mission lasted only few days: as he arrived to Tenkitten to preach, he suffered the martyrdom on April 23rd 997. After having pierced with lances and arrows, his body was furiously attacked and his limbs dispersed . The duke Boleslao recovered his remains and made them transferred to Gniezno, the ancient Polish capital. Some relics were later on transported to the Basilica of St. Bartholomew by the friend emperor Otto III. He was canonized in 999.
The presence of the relics of the Bohemian saint has attracted in this place, during centuries, pilgrims from those countries. The cult of St. Adalbert is spread in Boemia, Italy and Poland.
The most ancient trace of his cult in the basilica of St. Bartholomew is the white marble well, obtained from part of an ancient column, located in front of the altar. In one side it is carved the picture of St. Adalbert with the pastoral stick and the Episcopal vestments.

ST. BARTHOLOMEW
Bartholomew was one of the twelve apostles; he was never mentioned in the Scriptures and usually is identified as the Nathanael of the first chapter of the Giovanni's Gospel, taken to Jesus by the apostle Phillip and known with the patronymic Bar-Talmae that is Bartholomew.

This Gospel page is the only reliable source relevant to Natanaele-Bartholomew. In the Gospels his name appear always together the names of other disciples. Also Bartholomew's events after the death of Jesus are not clear.
He was born at Cana of Galilea and, according to the legend, he spread the news of the death of crucified Jesus. Later on we have news of his presence in the whole Lower Asia, from Persia to Armenia, to Mesopotamia, to Egypt, from the coasts of the Black Sea, to Frigia and Licaonia (Licaonia was also one of the Tiber Island names during the Middle Ages).
They say that, after the Ascension of Christ, he preached the Gospel in India.
In the "Martirologio Romano" [Histories of Roman Martyres] it is written: "predicò nell'India il Vangelo di Cristo; recatosi nell'Armenia maggiore, avendo convertito moltissimi alla fede, fu dai barbari scorticato vivo, e, per ordine del re Astiàge, colla decapitazione compì il martirio" [he preached in India the Gospel of Christ; gone to Greater Armenia, after converting many people to the faith, he was skinned alive by Barbarians, and, by king Astiàge order, he suffered the martyrdom by decapitation].
The ancient Christian Church remembers him, together with St. Taddeo, with the title of "First lighter of Armenia."
His relics were moved to Lipari Islands in 809, and from there to Benevento in 983 and finally to Rome.
St. Bartholomew is the protector of all the workers that are involved with skins, blades and knives as butchers, but also tanners, numerous during the Middle Ages just on the Tiber Island.
The day of St. Bartholomew, August 24th, was celebrated in Rome with the "cocomerata" [watermelon happening], when the boys competed swimming to recover the watermelons thrown into the Tiber.

The remains of St. Bartholomew [ From «Reliquie Insigni e "Corpi Santi" a Roma» by Giovanni Sicari ]
In 410 the remains of Bartholomew were moved to Martyropolis and Maiafarqin by the bishop Maruta. In 507 they were moved again by emperor Anastasio I to Darae in Mesopotania. In 546 they were in Lipari and in 838 at Benevento. From 983, borne to Rome by Otto III, they are in the ancient porphyry basin of the main altar in the church of St. Bartholomew Apostle in the Island. His relics result spread in various european churches. In 1238 the skull-cap was brought to the cathedral of Frankfurt-on-the-Main . Others are in the Chartreuse of Colony and in the monastery of Lune near Luneburg. St. Edward donated a part of an arm to the cathedral of Canteerbury. More of them are in France. In Italy the city of Pisa claimed the possession of part of his skin. The city of Benevento, that always sustained to have given to Otto III a wrong body, claims the possession of his relics kept in the church dedicated voted to him. In Rome, due to a Tiber flooding, in 1557 the relics were moved to St. Piter in the Vatican. In 1560 Pius IV made them bring back to the Tiber Island with a solemn procession. Due to the damages caused to the church by French in 1798 some relics were moved to St. Mary in Trastevere. In this basilica, on the Albis Sunday, they showed a famous relic of the saint. According to the Inventory (1870), on the Easter day part of his head was exposed in St. Prassede. On May 1st and on August 24th it was exposed (Roman Diary, 1926) part of an arm at the Sts. XII Apostles.